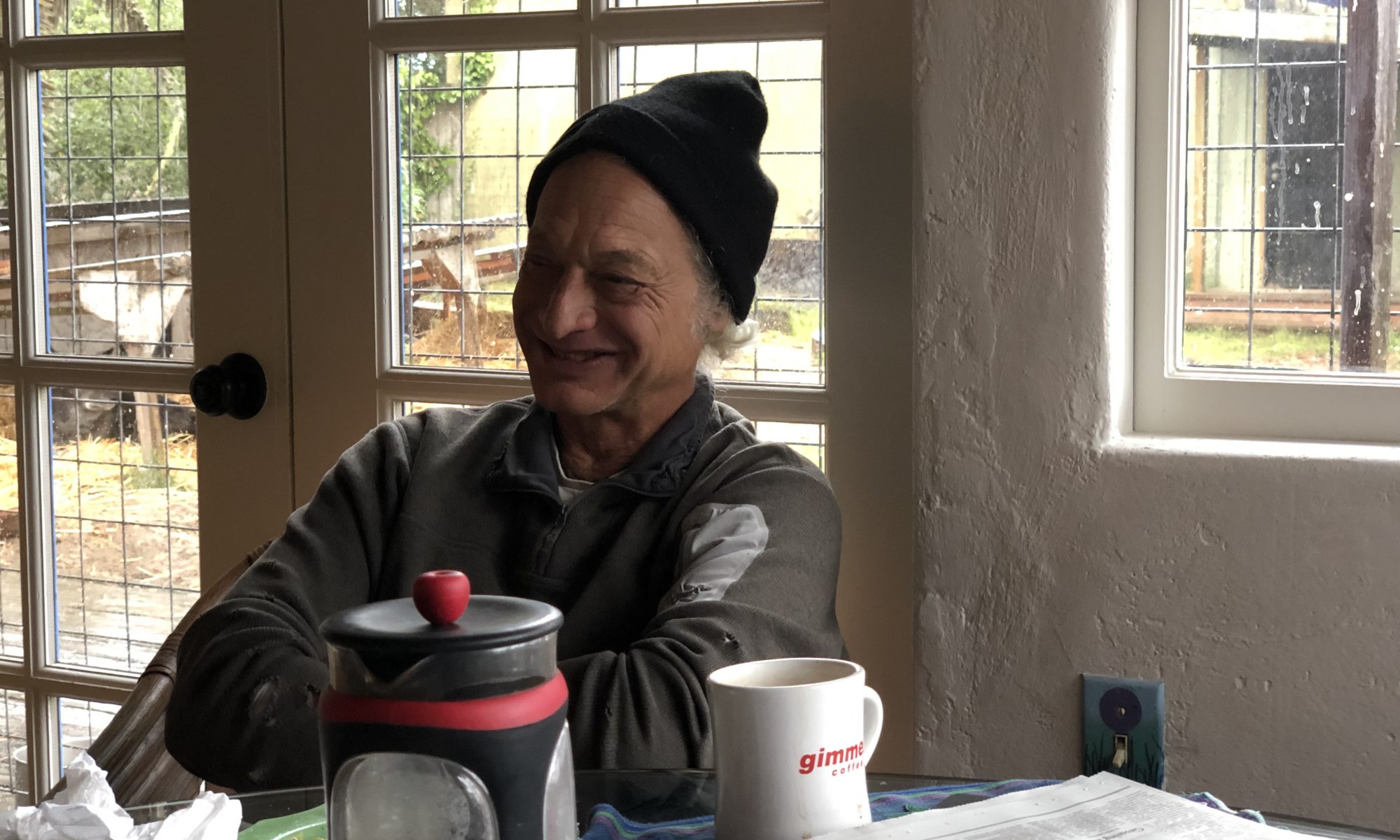 “Will you be coming back this way?” “It depends on how things open up tonight.” Kenny said. I was on my first wolf walk with two large Northwest Timber Wolves, Jenga and Aijan, male and female respectively. Kenny “handling” the male “punk kid” as he called him and Rob “handling” Aijan. “The wolves actually handle you.” Kenny had told me. “We just try to keep them out of harm’s way.”

It was early evening, the sun just dropped behind a few horizon clouds leaving a faint gold white glow in the west but darkness there on the beach with towering bluffs above, sand and sharp reef exposed by the low tide below. My headlamp was dim due to failing batteries and we were facing in the darkness a shadow of what seemed to be an insurmountable, slippery, crumbly ridge that needed to be crossed over in order to continue the walk. It wasn’t really a ridge it was about eight feet high but appeared to have no hand or footholds for crawling up and over. As I watched Rob tightrope up the side at an angle with Aijan gliding over the top, I realized I would not make it without falling and at least scraping the shit out of my hands and face or, if not that,  being knocked unconscious by falling from the edge and into the tide pools below.

“I think I’ll wait here.” “I’m not sure we’ll be back this way.” Kenny said again, “But you know your way back eh?” We had been walking for about 30 minutes in the dark, over an open pasture and down a steep trail through a ravine to the beach where we had been walking for about a half a mile. I realized I did not have any idea how to get back, especially in the dark with a dimming headlamp. My thoughts were flooded with stories of failure and fear, inadequacies, doubt, being  weak in the presence of my teacher. That was when the practice took over. “Just one hand, one foot, one movement at a time. Just the next step, just what is there in front of you.” A cool clear attention flowed through my awareness. I heard Kenny say something like “can you see?” as he shined his lamp on the hidden stepping places that slipped up the side and over the top of the small ridge.  And I was there on the other side, sliding down a steep slope after watching Kenny do it with a chuckle and “this is a fun part.” Just a few years ago, I would have been trembling and probably battered and scraped from clinging to the sharp crumbling reef as I crossed over it. But the practice just took over, with only the slightest thought of “Stay present.”

The night was star-laden and a cold wind was gently breathing me into the experience of the immensity of evening on a Pacific Coast, bluff-guarded, beach with two black shimmering timber wolves leading us into a silvery, luminous expanse of unknowingness. Their surety of foot and Rob and Kenny’s ease in the midst of being jerked along, slipping on exposed reef and tumbled down a ravine in the moonless night just happened. Tinglings of fear mixed with giddiness and a prideless confidence carried me through the three hour, six mile walk over sand, reef, up ravines, over pastures under low hanging Eucalyptus into pitch darkness and then home. The practice handled me while the wolves and my teacher kept me from harm.

The second night of walking, Kate replaced Rob with Aijan and it was raining. We began a bit earlier because we would be doing ceremony that evening, so there was some light for the first half hour or so. It was a grey light due to the cloud blanketed sky, but I could see better and had replaced the batteries in my headlamp so there was a bit more ease in my step.

As we came out of the first pasture to cross down a ravine onto the beach the wolves startled and tried to bolt back up the path. It rattled me and I wondered what could have caused these powerful, confident…. beings to startle.  Two women were working there way up the same path and the wolves were straining at the leads to get away. The women willingly took a side path and let us pass. We soon came to the outcropping that had taught the lesson the previous evening. I didn’t scamper like the rest of the travelers but I moved with relative ease, even cutting my hand as a result of a careless step when I was thinking about how easy it seemed to be.

Immediately upon sliding down the slope, Jenga came and thrust his head into my hand and  nosed the bleeding cuts. He wanted to lick the wounds clean and would not give up. It did not feel quite right to have the tongue of a wolf licking my blood. He finally relented after several clear rejections on my part.

A bit later, I was walking next to Kenny. “Why were they so skittish back there?”

“They’re wary… of anything new in the environment.” “Why should they be wary?” They are the top predators and have no predators themselves except for us. Is it a wariness of humans?”

Wolves have an holographic experience of the world. They can sense and map a 200 mile radius. They are aware of anything unusual in the sphere and prefer to live on the periphery as an observer. Always aware and wary of making contact with any thing outside of the pack.” It is in their instinct, their DNA. They cannot help it. Kenny said”

I felt that I had been given an answer to a question that was in constant reverberation in the marrow of my bones. Wariness, a holographic picture of the environment for as far as I could perceive with both conscious and unconscious senses. I am always experiencing an everpresent wariness of the environment. I can map people’s expressions, subtle movements, glances, even their breath. I look for signs that I am doing something wrong or something that will trigger displeasure or disappointment or anger or aggression. I developed it as an infant, I believe, in an unpredictable environment that could shift from laughter and play to threatening anger and aggression. As I grew, the unspoken threats of violence and anger permeated the house and anything that threatened the order laid out by my father would result in a comment about my selfishness, my stupidity, or my inadequacies. The approach by my mother was different. Attention came only when I said or did something that was right in her view or that helped to ease her suffering in some way. There was love there but it was constantly clouded by their own intergenerational trauma.

Wariness, like the wolves was embedded in my being, wired into my nervous system and no matter how much work, I did it would always be that way, or so it seemed in the moment. That evening in the ceremony I was guided by the Grandmother through a tour and recall of the ten years of ceremony work that I had done with Kenny years before. The celestial beings sang their songs and wove new cloths of harmonies and healing into my being. In the midst of the work, I doubted the efficacy and the purpose, since as I had discovered, these early childhood imprints were not to be healed or removed. They were the asphalt road of my life and even the hottest sun of warm awareness could not melt them an the most frigid ambivalence could not crack them open. However, Kenny saw clarity in me that he had never experienced before in our work. He blessed and adorned me with garlands of ease and honored me with ancient icaros and medicine to give me strength and goodness on the road ahead.

I woke from the ceremony to sit, practice and watch the sun rise over the Pacific from a bluff that overlooked the tidepools laid bare by the tidal ebb. I felt warmth toward my life and the road that I had travelled. I felt ease at being able to see that what I had thought needed to be done away with just could not be abolished. It was how I had arrived at where I am. I sang a blessing song to honor the concrete road of my life and bowed down in gratitude to its unwaveringness and unyieldingness. And in the instant that I I fully embraced it… it dissolved  or rather became everything. A road, a sky, an ocean, a heartbeat, the breath of all the children I have taught, my mother, my father, my brother, my lovers and my husband. All of the gravelly pebbly substance of it dispersed yet remained. I recalled Dogen: (paraphrased)”A mountain is not a mountain without the earth, the earth is not the earth without the mountain. The ocean is not the ocean without the wave. The wave is not the wave without the ocean.” These things cannot be undone nor are they ever really done. It all is.

I walked the path of the wolves the next day in the light by myself. Seeing all the details that are absent in the dark of a moonless night. I walked my own wolves and paid reverence and honor to Jenga, Aijan, the medicine of the celestial beings, Grandmother and my teacher Kenny.

On to Death Valley!!!