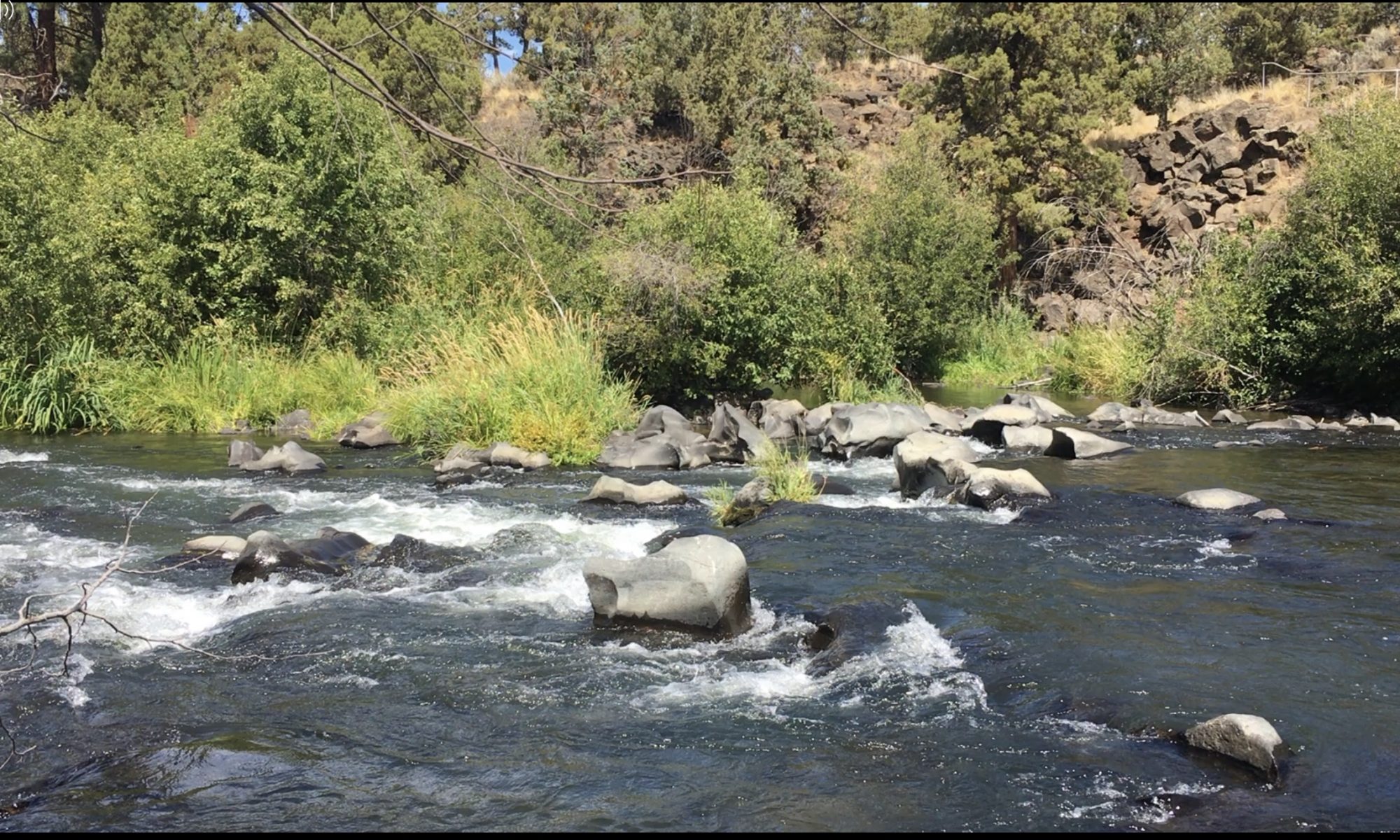 A river flows through Bend Oregon, from Little Lava Lake to the Columbia, called the Deschutes translated from French as “the river of the falls”. The Nez Perce people of the area refer to the river as Towarnehiooks, translated as “enemies” in reference to the Paiutes who lived along its banks. Like it’s Native name, the Towarnehiooks, brings to mind how our pervasive thought stream can be an enemy and lead us to suffering, or when recognized as having no substance, to freedom.

In its traversing through this region, the Towarnehiooks is a relatively narrow and shallow river that has molded the lavascape into smooth and pointed curvaceous forms like concretized whipped cream, in the same way that my habitual thought patterns have concretized my ways of being. As the waters lessen through the summer, the flowing of the river over these forms creates rapids that fill the area with a constant sound barrage of water tumbling into itself over stone. Adding to that, the sounds of children voices as counterpoint and harmony, as well as the slight river-breeze effect in the summer sun- heated desert air, and the river and its surroundings manifest as meditation teacher.

When I begin a sit, thoughts are so omnipresent that I do not notice them. They deafen my awareness. It is like when I first approach the river rapids; visual and audio discernment seem unattainable . After being near the water for a while, I begin to discern variations of white in the tumbling and an under flow of grey green, and different levels and qualities of sound. As with the water, when I settle into a sit and attend to something, either my breath, an image or a sensory experience, I begin to be able to ferret out gross and subtle experiences, images or thoughts.

When I attempt to focus on one aspect of the white or underlying green of the water, my vision is carried downstream until I cannot follow it any further, no matter how much I attempt to keep it centered in one point, similar to the cascade of thoughts that are present in the beginning of the practice. When I attend to a thought, it inevitably leads to another about that thought, and then a story, and a why, or another question, or just random sequencing until I become aware that I have traveled downstream in a thought river.

Concentration and attending become accessible at the rapids, when I center my sight or hearing or sensation on a stable unwavering manifestation, like a rock in the middle of the cataract, the underlying softer sound of the river, the deep grey green beneath the tumbling, or the coolness of the breeze created by its movement. Then the other sounds, or senses and the raging water itself move by as they are, swift or slow, green or white, loud or rumbling quiet. I can experience all of these things and, the more I allow my awareness to expand and include them and all of the sensory experiences in the environment without following them downstream, the more I “see” the river as a whole, and the innate ease in its flow, even welcoming the loudness, the riotous white and the heat of the summer sun as part and parcel of the quiet flow, the stable grey green and the everpresent coolness.

So it is with the practice. In the beginning, centering attention and concentration on the breath or an image or a sound allows my constant thought stream to flow by; at first loudly echoing off canyons in my mind, and it is challenging not to follow one of them just to lower the input level. The more I am able to attend to something consistently and the focus softens and broadens, the more the thought and perception streams flow by in my awareness without me attaching or following the threads. I am sometimes able to expand to include any and all thought streams without judgment or grasping. In this experience there is no attempt to stop the river, change it, damn it up, divert it or let it tumble me downstream. Feelings, perceptions and thoughts are just as they are.

When the children throw a leaf or stick into the river to cheer its journey downward, over white, spinning by boulders, and dipping beneath the grey green, the newly introduced object is sometimes snagged by a gathering of stones but swims easily around the largest boulders. If the newly introduced object is large enough, it may get trapped under or around the largest obstacles. These stuck ones are battered by the ongoing flow of the river but remained lodged, perhaps until the next flood or until they are decimated by the repeated assault.

When a fresh thought or an awakening is experienced in the practice, it floats easily on the surface of the thought stream and seems to not only ride it expertly, but becomes one with, it so to speak. Then a collection of memories or thought habits snag and batter the experience and  my attention becomes fixated on the why-s and wherefore-s of the the thought, getting lost in fixing, or solving, or grasping, desperate to return to the newness and the freshness of the realization. If  the thought is large enough it easily swims by the smaller jumbled obstructions but might be is snagged in something much older and more fundamental, even karmic or ancient. This happens for me with strong emotions like anger or fear often triggered by unconscious memories of experiences. Often it is so intense that I can feel it in my body. A memory of what it was like to be one with the river arises and I feel like the snagged branch on the great boulder. I experience a psychic ache to set it free once again but no amount of attention or longing releases it. Then there is a an idea that the boulder is an obstacle and must be recognized and, only when it is either dissolved or freed from its mooring, will the awakening return to the thought stream and experience. So then I invest in its dissolution only to become even more swamped by all of the adjacent thought patterns and the fixation on what I think freedom feels like.

When I am able to relax my focus more and bring my attention downstream to attend to where the river is going, the focus and attention just go away and there is a sense of space. I have a concept of its destination; the deep ocean, but it may end in a flood plain and evaporate, or be diverted to water the orchards, or to city plumbing to be processed and recycled, honestly I do not know. Allowing that unknowingness to fill the experience leaves an empty spaciousness. When I look up river to the origin, I also do not know it, other than there are probably infinite origins that feed the the springs, the creeks the streams, the falls, that cause the river to be as it is in this place, between these banks, under the juniper, on wind sanded stones, with children laughing in its coolness and its power.

When I am sitting at this point trapped under a karmic boulder in the thought river, I might look to where the thought stream is going or will lead; the future. Similar to the tumbling torrent of the Towarnehiooks, I do not know. In fact, I begin to experience an understanding that this thought stream has no knowable future. It seems to dissolve into that expansive all inclusive mind and there is a sense of its emptiness. When I look to the origin, or rather allow my awareness to experience the causality of the thoughts, it echoes out over an infinite stream of causality and eventually expands to seemingly include all thoughts ever thought in all minds in the cosmos. And for an instant, sometimes, there is the knowable yet inconceivable experience of the Three Times being all the same and yet empty. The mind stops striving, the sense of a separate self shimmers like a hologram, and I have a taste, wavering on a threshold of absolute freedom from suffering.

Sitting on one of those ancient obstructions in the middle of the river I observe how the river flows effortlessly around and that only things of weight or form get caught by the boulders or collections of smaller river stones protruding from the water nearer the banks. I see the water merging with the obstructions, and bouncing off or sliding smoothly past. Eons of time and infinite gallons of flow; carving, smoothing, and sanding them to billions of sub-sand particles that disperse in the soil or eventually the seas. The larger obstructions empowering the river to dash itself on their surfaces, carving them away, by lifting the river out of the flow and then channeling the river to the path of least resistance.

In the practice my thought streams get swept away when I lose attention, and deposit my attachments and desires on karmic obscurations, life imprints and self-ness (the boulders), but when I allow the stream to flow without judgment or diversion, I experience a steady eroding of these habits. I also begin to see that the larger ever-present thought habits, or unsourceable obstructions are like the Buddhas in their infinite capacity to know and to guide. As if the Great Sage embodies my obscurations and obstructions in order that they not only are revealed but can be entrusted to channel this river of self to the ocean of no-self.

Perhaps, when I leave the banks of the Towarnehiooks and get up from my sit, thoughts will no longer be the enemy and I will experience obstacles and obscurations as guides, revealers, and Buddha Nature. I ask that this teaching will not just be a clever metaphor or a lasting memory, but that I may be of-this-way in my life off of the cushion and away from the river.

I dedicate this practice to the Towarnehiooks and all teachers, seen and unseen, heard and unheard, known and unknown. May my actions, deeds, speech, thoughts and feelings be in fulfillment of their teachings and the end of suffering for all beings.